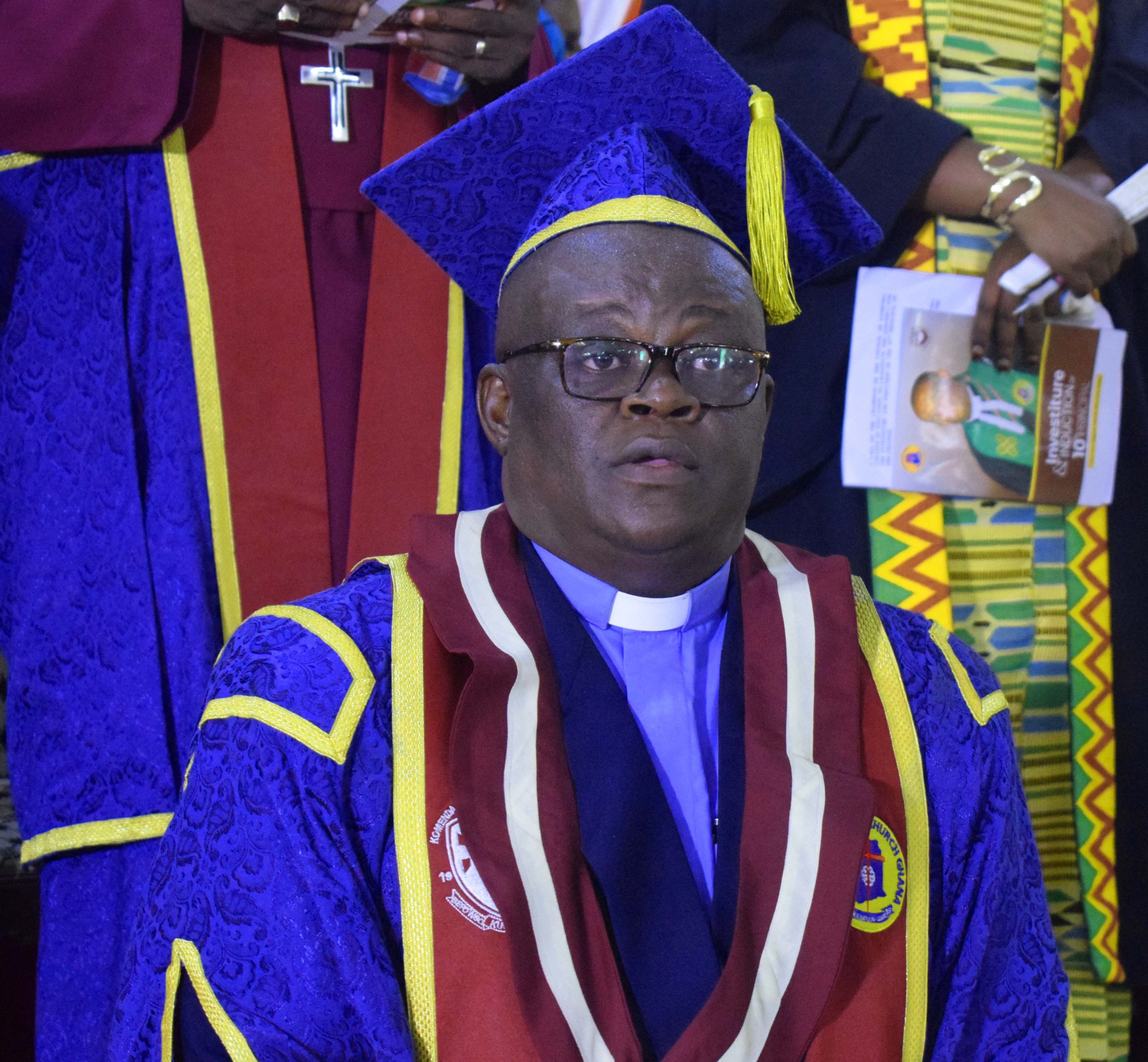 The Rev Kwesi Nkum Wilson (PhD), was born in Agona Swedru in the Central Region of Ghana on 14th June 1970. His parents are the late Very Rev Joseph Wilson ‘B’ and Mrs. Ivy Wilson (néé Baiden). The Very Rev. Kwesi Nkum Wilson (PhD), has a very rich background in Methodism and for that matter Christianity and education in Ghana.  Maternally he is a direct great grandson of Mr. Thomas B. Crentsil (Okra Kwaa), a former regent of Saltpond and a renowned merchant of the Gold Coast, he was also the first Circuit Steward of the then Saltpond and Anomabo Circuit of the Gold Coast District of the Methodist Church. Mr. Crentsil, is known to have bought a silver trowel for the foundation stone laying of the magnificent twin tower edifice of the Wesley Chapel at Saltpond on 26th December 1910. His maternal grandfather is the fearless Venerable Jacob Eduam Baiden (1881-1977), the first editor of the Ashanti Pioneer in 1941, the second African District Grandmaster of the Gold Coast Odd Fellows. Mr. Jacob Eduam Baiden and Mr J. B Danquah worked together to raise funds for the establishment of the University of Ghana.

Paternally, Rev Wilson is a direct descendant of Rev Akwaise of Nanaanom-pow fame, one of the early indigenes to be ordained as ministers of the Gold Coast Methodism. Rev Akwaise’s nephew the Very Rev James Reynolds (1859-1938) was also ordained as a Minister of the Wesleyan Mission and he served Apam and Winneba Circuits among other stations.  Rev Reynolds nephew was the Very Rev Joseph Wilson ‘A’, (1888-1980), Rev Wilson ‘A’, is reputed to have built lots of schools wherever he served as a minister. Rev Wilson ‘A’, begat Rev Joseph Wilson ‘B’ (1925-2006)

His father being an itinerant minister of the Methodist Church Ghana, meant that he had to change school anytime his father was transferred, he attended the Methodist Primary Schools in Cape Coast, University Primary School, Cape Coast, Akotobinsin Methodist Primary School, Elmina, Bethany Methodist Middle School, Essikadu, Diabene Junior High School, Diabene-krom Sekondi. This continued until 1985 when he was admitted at the Mfantsipim School form two, thus completing his G. C. E Ordinary Level Examination in 1989.
On 16th January 1984, young Kwesi had a terrible accident, at 8;30pm whiles playing under moon light he fell from the top of the Methodist Manse, Essikado and landed on his back, he was confined to bed for one month and recovered quickly.
Having successfully passed his O’ Level, Rev Wilson entered Fijai Secondary School, Sekondi in 1989 to pursue Advanced Level examination completing in 1991. At Fijai, Rev Wilson was appointed Library Prefect, elected S.U. President, President of the School Choir. He was also the lead debater for the School and an active member of the drama club. This is what the then headmaster of Fijai Mr S. K. Folson said about Rev Wilson in 1991 “Wilson is a well-behaved student and there is every indication that he can go places when given the opportunity to do so. I do recommend him to any organisation where his services may be needed. He will be a great asset to that organisation”
After his A’ Level National Service at Assin Juaso in the Central Region of Ghana, Kwesi gained admission at the University of Cape Coast in 1992 to read Bachelor’s Degree in Educational Psychology and a Diploma in History concurrently, completing in 1997.
After working for some time Osofo Paa Kwesi, pursued a Master of Philosophy degree in Counselling from the University of Cape Coast (2004). With the strong desire to serve the Lord, Rev. K. N. Wilson was admitted at the Trinity Theological Seminary in 2004 to pursue a Bachelor of Divinity degree and was Commissioned into the itinerant ministry at the Wesley Cathedral Sekondi in 2007. Rev. Wilson capped his academic pursuit with a Ph.D. in Counselling Psychology from the University of Education in 2015. Rev Wilson has attended several workshops locally and internationally.

Working Life
Rev. Wilson started his working life in 1992 during his ‘A’ Level National Service at Assin Juaso in the Assin District. After his first degree, he taught at Mfantseman Girl’s Secondary School, Saltpond in 1997 whiles awaiting his National Service posting. Rev. Wilson taught at the SOS Herman Gmeiner School, Asiakwa (E/R) as a Special Needs Educator, School Guidance Officer and Social Studies Teacher (1997-2001). He had to resign from SOS in 2001 for further studies, and this is what Mrs Juliet Kono, the then Head of SOS Asiakwa wrote, “Mr Wilson is a self-motivated and self-regulated teacher who executes his duties on time, with noticeable mental agility and with marked originality”
Whiles completing his M. Phil thesis he was employed as the Principal Administrative Assistant at the Counselling Centre of the University of Cape Coast (2003-4) having successfully completed his ministerial formation and commissioned into the ministry in 2007, he was posted to the Komenda College of Education as a Tutor and a Chaplain.
It is instructive to note that in 2004 Kwesi turned down an offer of lectureship at the University of Cape Coast and finally resigned his position of Principal Administrative Assistant to respond God’s call into the ministry. In 2008 he had two offers from the Kwame Nkrumah University of Science and Technology (KNUST), as the Head of the Counselling Centre and the University of Education, Winneba (UEW) as a Lecturer. Upon sober reflections, prayers and consultations, Kwesi accepted the offer from UEW.
Between August 2008-April 2019, Rev Wilson taught at the University of Education, Winneba and also served as a Counsellor in the Counselling Centre of the University. He was appointed at the University Chaplain for the period 2011-16, and 2017-18. In January 2013, he was promoted Senior Lecturer at the Department of Psychology and Education and in 2016/17 Academic Year appointed as the Head of Department of Psychology and Education in the Faculty of Educational Studies.
Very Rev. Wilson has in-depth experience with Ghana’s educational system. He serves as an advisor to the Guidance and Counselling Unit of the Ghana Education Service (GES), and is a member of the Technical Working Group (TWG) on the Safe School Project being undertaken by GES. He has run series of workshops for educational institutions in Ghana. In August 2019, he was the Speaker for a Public Lecture organised by the Ghana Psychological Association (GPA), at the British Council Hall, Accra. The title of paper presented was “Attaining Quality Education: Untying the Knotty Issues”
The Very Rev Wilson is a member of the Educational Research Network for West and Central Africa (ERNWACA), International Society for the Study of Behavioural Development (ISSBD). He was the chairperson of the ISSBD 2017 African Workshop hosted by Ghana in 2017 at the University of Education, Winneba. He is also a Gazetted Member of Ghana Psychological Council, a member of Ghana Association of Writers (GAW) and finally the University Teacher’s Association of Ghana (UTAG). He is a co-recipient of the Forum of African Women Educators (F.A.W.E.) 2012 Gender in Africa Research Grant.
He has co-authored a book on Counselling Skills and written on Preparing for retirement.
Office of the Principal